I’m nearing the end of recapping our two week tour of Turkey! Looking through all of these photos is making me homesick. I want to drop everything and head to the Turkish coast.

After Pamukkale and Hierapolis, we drove to Kuşadası and spent the night at Sergent Hotel. It was a great hotel with a fantastic view of the beach. They were so helpful and accommodating.

Unfortunately, Dad had been battling a stomach bug for a few days, and ended up going to the hospital the next morning for antibiotics and fluids. David and Mom took him while the boys and I walked the boardwalk, peeked into the shops, and stuck our feet in the Aegean. The Turkish coast is paradise. I mean, look at all these blues:

After a few hours, they came back from the hospital. Dad was feeling a little better and we drove 18km north to Ephesus.

Ephesus was a major port of commerce in the ancient Roman world. Over the years, the waters receded so it no longer sits directly on the coast. The city was famed for its Temple of Artemis, one of the Seven Wonders. The apostle Paul spent time in Ephesus and had a heart for the believers there (Acts 18, 19, 20). It is also one of the seven churches of Revelation (Revelation 2).

Ephesus was one the first places David and I visited when we first moved to Turkey. We enjoyed showing the family the ruins, library, terrace houses (completely worth the extra entrance fee!), and theater. I can’t believe how blue the skies were this day!

Family photo inside the Theater of Ephesus. It can hold 25,000 people and has perfect acoustics.

After a few more Magnum bars, we drove three hours north to see our third of the Seven Churches of Revelation. 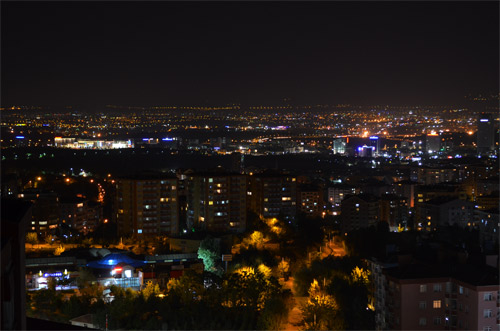